The objective of sterilizing medical devices is to reduce the bioburden to a safe level with minimal effects on the desired properties of its constituent polymers.

Technology advances have improved the performance of e-beam radiation, making it a safe, efficient, and reliable source of energy for sterilization. High dose rates reduce the time of exposure, which can make e-beam a less costly alternative to gamma radiation.

Figure 1 shows the changes in b* value, which measures the blue to yellow scale after e-beam exposure at 50 kGy. Photos of the molded samples before and after exposure are available upon request. 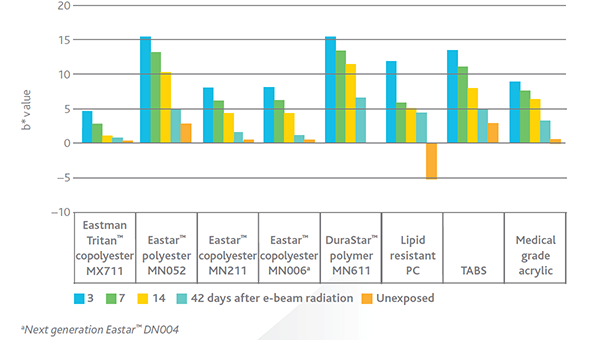 Figure 2 shows the difference in b* color values between unexposed samples and sterilized samples at Day 42—after e-beam radiation at both 25 and 50 kGy. 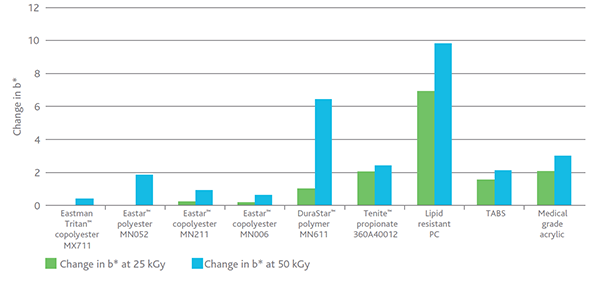 Physical properties were measured before and after e-beam sterilization at 25 and 50 kGy. No physical property degradation was noted for Tritan MX711 or the other resins tested. The polyesters and copolyesters in the study showed no statistical change in molecular weight although Tenite™ propionate 360 did show a loss of molecular weight, as expected from an aliphatic polymer.

For complete details of these studies or more information about the advantages of Eastman Tritan™ copolyesters, email Eastman today.